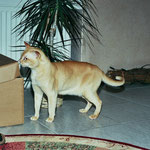 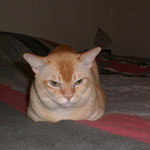 He is a red Burmese from Finland and is the father of three litters. Now he is neutered and lives with Hayna again in Holland with Rob's son. 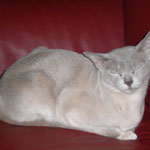 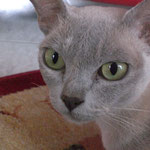 She got two litters, with in total, eight kittens and lives with Groovy with Rob's son in Holland. 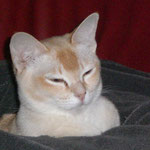 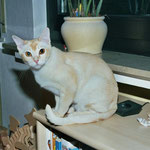 She was our Burmese queen with our B-litter. She was a red-silver Burmese and immediately captured the heart of my youngest son. Unfortunately, she gave birth to her litter at the time we were not at home. Therfor we did not notice that two placentas were still missing. A day after she gave birth ot her litter she became high fever so we had to go to our vet. It turned out that there still was a placenta in her uterus. The placenta was removed by the vet but  three days later she became fever again. It turned out that she had another placenta in her uterus left. During the time she was so ill we fed the kittens by hand. Our other cats took over the other nursery of the kittens. She recovered a little bit and started to take care of her little ones. After the kittens started to eat solid food she became weaker and weaker. We went back to our vet who did several tests. The tests came with the result that her liver was damaged due to the two placentas. The vet tried to get her healty again but she was in a too bad schape. After a few days we unfortunately had to let her sleep peacefully. As a living reminder her son Baba lives with us.